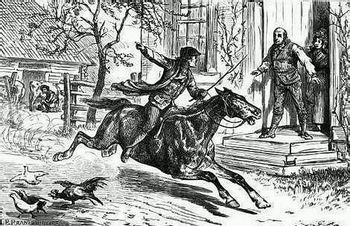 Paul Revere's ride.
"Sharp and quiet, lads. They'll likely try to come by stealth, so be ready for the signal."
"What is the signal?" wondered Brocmael aloud.
"You'll know it when you hear it," answered Scarlet, "for you've never heard the like in your whole sweet life entire."
— From Tuck by Stephen R. Lawhead
Advertisement:

This is where someone sends a dramatic signal to a powerful ally. The purpose of the message is usually to ask for assistance or send a warning in desperate circumstances. The act of sending the message is often dramatized through problems with the person or device used to signal, thereby necessitating last minute repairs or improvisation. Epic Hails usually occur prior to a Final Battle, semi-apocalyptic situation, or (if the ally is traitorous) a Big Bad Friend reveal.

Somewhat less often, an Epic Hail is used by the villains. When this happens, it's almost always an Evil Overlord who wants to signal his armies to attack and can't be satisfied with a messenger on horseback.

See the related Gondor Calls for Aid for the trope of calling for aid in general. If successful, can result in The Cavalry coming over the hill to the rescue. Often serves as the conclusion of a Bring News Back plot (where instead of trying to run all the way themselves, the goal of the news-bearers is to reach and activate the Epic Hail).

See Bat Signal for the specific case of projecting a hero's logo into the sky.

This trope has nothing to do with the weather condition. Or with Soviet salvo launcher name. Or the type of fail. Usually.