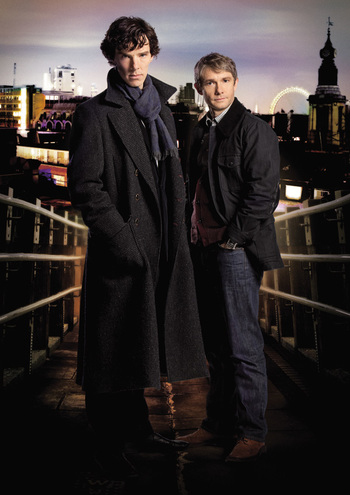 A new sleuth for the 21st Century.
"There is a last refuge for the desperate, the unloved, the persecuted. There is a final court of appeal for everyone. When life gets too strange, too impossible, too frightening, there is always one last hope. When all else fails, there are two men sitting arguing in a scruffy flat like they've always been there, and they always will. The best and wisest men I have ever known. My Baker Street boys: Sherlock Holmes and Dr Watson."
— Mary Watson
Advertisement:

A modern-day version of Sherlock Holmes (2010-17, effectively on indefinite hiatus since then), created by Steven Moffat and Mark Gatiss, produced in ninety-minute format for BBC TV for three episodes a season. Sherlock (Benedict Cumberbatch) solves crimes through sheer intellect and his Sherlock Scan, but is a (self-proclaimed) "high-functioning sociopath" barely kept in check by his friend Dr. John Watson (Martin Freeman) as he's called upon for the more baffling cases. The series incorporates 21st-century forensics technology, computers, smartphones, and Google searches.

aired on New Year's Day 2016, taking the characters back to the original Sherlock Holmes setting of the Victorian era. Though initially presented as an "alternative" to the modern version, things soon get stranger.

A similar concept to Jekyll, another Steven Moffat-produced television series based around setting a classic Victorian story in the 21st century. Not to be confused with Elementary, the American Sherlock Holmes show also set in modern times but otherwise completely different in premise and episodic structure. Has an official manga adaptation.

As of 2021, plans for a fifth season were already completed. But due to busy film/TV scheduling from both Freeman and Cumberbatch, it's currently on hold.

For tropes used in specific episodes, see the episode recaps. For tropes relating to specific characters, see the character page.

This series contains recurring examples of: