Living in a Furniture Store 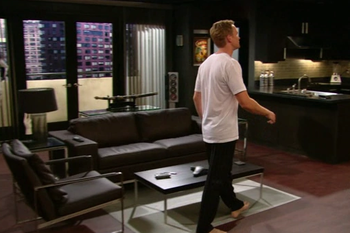 In the Standardized Sitcom Housing that Dom Com families live in, things are always well organized, clean and tidy: no open books are ever left on the coffee table, and no shoes are ever sitting randomly by the front door, no clothes are strewn on the floor (unless Chekhov left them there). You'd almost think that they were living in a furniture store.

Oh, sure, there'll be arguments about doing dishes or housework, and they may demonstrate this with excessive waste, or just allude to how messy it is. But beyond that, nothing clutters the place up, and the junk is at least in one place, out of the way — possibly in an Exploding Closet. Sometimes the place may be doused in grime and stains, but will still probably be free from mess.

This is especially noticeable when the inhabitants are stated and shown to be lazy, slobbish, or disorganized. It's also more common in cartoons, as it takes a lot of effort to draw convincing clutter. In Live-Action TV, the actors still need to move about the set safely, the director will want to enforce The Law of Conservation of Detail, and too much stuff can cause shooting errors quite easily.

This does not include cases of people actually living in furniture stores.