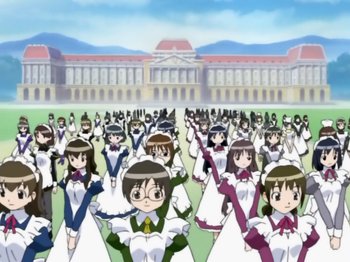 Each different uniform color is a separate department.note We got, from right to left, "help with office work", "costumes", "personnel", "cooking", "administrative", "secretary", "technology", "financial", "security", "information", and "health"; not shown here is the "Personal Care" department. Oh, and they later create a "personal attendants" department from scratch, just for the protagonist.
Advertisement:

A well-off person may have a maid or two in his house. Likewise, a truly wealthy person may have half a dozen or so, taking care of his understandably spacious home. And of course, it wouldn't be extraordinary for filthy rich people to have a couple dozen domestic workers to handle the housework of a really Big Fancy House. It also would be expected for aristocratic/monarchic families with large estates, major hotels, cruise ships and the like to have a ~100-strong domestic worker staff.

Compared to this trope, those guys are pikers.

A Maid Corps is an army of multiple hundreds of servants — sometimes apparently thousands — that typically are either way too many for just handling the domestic chores, or in addition to the "traditional" housekeepers and personal attendants, there are a more or less equal (or even greater) number of "maids" who perform decidedly "non-domestic servant" work, which may run the gamut from qualified medical doctors and nurses, to computer specialists, to scientists and mechanics, to personal bodyguards, and even a private paramilitary force. Bonus points if both variants are combined.

Oh, and usually they all wear Meido / French Maid uniforms. Yes, including the ones whose duties would normally require a completely different dress code. Such is the power of Fanservice.note Note to editors: Examples where fewer than, say, 2/3rds of them wear it may fit better under Amazon Brigade. If it's their equivalent of full dress uniform, that's close enough.

Some of the truly huge Maid Corps may leave one wondering how their employer's finances haven't collapsed yet from attempting to employ so many maids for so many (often high-budget) "responsibilities"; thus, having a Maid Corps usually designates a character as obscenely filthy rich.

Note that while the implementation of the first two traits (numbers and "responsibilities") can be somewhat variable (though at least one of them must be used in some form), unless the plot demands it at a certain point (after which it is often conveniently never brought up again), the third (finances) is a practically universal aspect of the trope; a typical Maid Corps should be a financial and bureaucratic nightmare to manage in Real Life.

Normally an all-female trope, though the rare Gender Flip does occur.