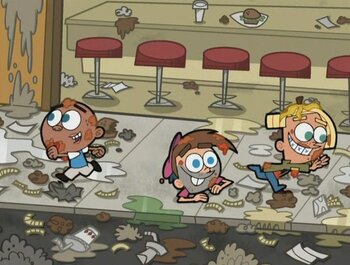 A fairly self-explanatory trope which hinges on the lauding of vulgarity, poor hygiene and boorishness as the epitome of masculinity. Works that use this trope proudly revel in uncouth stereotypes of adult men as being poorly mannered, lazy, obnoxious, drunken, gluttonous, vulgar, filthy, and... well... slobs.

When this trope is used, it is almost always combined with Men Are Uncultured, though the opposite need not be true. Often a key component of Mars and Venus Gender Contrast.

It may be because they are a 40-year old Manchild trying to cling to their hard-partying Fratbro 20s, so their apartment is littered with empty beer bottles and pizza boxes. Or if they are an Absent-Minded Professor or eccentric inventor, maybe they're so immersed in developing cold fusion that they forget to clean their house.

Contrast with House Husband. Sister Trope to Men Can't Keep House and Lazy Husband. Compare with Lonely Bachelor Pad which sometimes invokes this trope as well but not always.