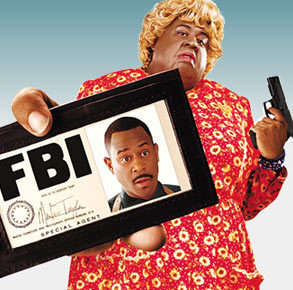 Inara: So... explain to me again why Zoe wasn't in the dress?
Mal: Tactics, woman. Needed her in the back. Besides, them soft cotton dresses feel kinda nice. There's a whole... airflow.
Inara: And you'd know that because...?
Mal: You can't open the book of my life and jump in the middle.
— Firefly
Advertisement:

See that harmless little lady over there? She's actually a man — a masculine, adventurous man who uses the dress to appear harmless and hide in plain sight.

Men are active, women are passive. That's the way things are, at least according to traditional gender roles.

Thus, if a man wants to become invisible and appear nonthreatening, it can be beneficial for him to pretend to be a woman. In sharp contrast to most forms of regular cross-dressing, this is done as a way of avoiding attention.

Contrast Sweet Polly Oliver, which is something of the inverse of this trope, since those women dress as men in order to openly embrace the male gender role of being active and potentially dangerous.

Many of the examples specifically have a male character disguising himself as an old woman, which is somewhat less reliant on sexist perceptions since senior citizens are (stereo)typically weak and frail (and it's also somewhat more believable that a man could look like an older woman than a younger one).

Subtrope of Disguised in Drag. May overlap with Wig, Dress, Accent or Mugging the Monster.