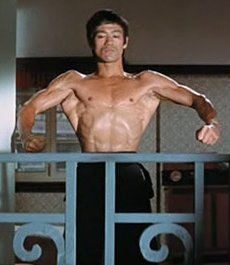 Bruce Lee, one of many reasons that fiction thinks "Testosterone" means "Awesome".
"I’m not on board with this modern trend of telling men that they should act less like men. I dream of a world where the beer is cheap and plentiful, violence can still be an acceptable solution to life’s problems"
— Introduction

Many cultures have certain expectations of what a man should and should not be. These qualities are deemed "masculine" and the men who embody them are called "real men." Common traits include bravery, diligence, endurance and strength. Failing to achieve this standard often meant rejection and mocking, while living up to it meant being stuck in a rigid role. Thankfully, these demands have loosened considerably in many parts of the world.

Some guys just never bothered to care, though.

Whether or not these tropes are positive or negative, they demonstrate what society considers masculine.

Contrast Bishōnen, Pretty Boy, In Touch with His Feminine Side, Femininity Tropes.

Not to be confused with The Real Man (though the attitude of such players can be rooted in these tropes).