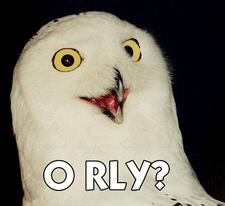 One of the most common pastimes available on the Internet. Take a fairly representative image of some kind, slap a redundant caption on it in a bold stark font, and upload it somewhere to share with people. It's as simple as that!

Most image macros are photographs of cats, called LOLCats, but they don't even have to be photographs. Captions are typically word replacements (called snowclones) of Internet memes, such as "Im in ur X, Ying ur Z", "I has a X", "X has a flavor", "redundant statement is redundant", and "invisible X".

Despite still being popular in some circles, the once iconic "advice animal" format is, in general, considered a long-past fad of the late-2000s/early-2010s. Continued production of image macros (such as new variations on the "advice animal

The term comes from the Something Awful fora where certain keywords were replaced with funny pictures, or "images", by an automatic script, or "macro". The vast majority of lol* are not actually used that way anymore, but it's the term that most people know.

Image macros as page images are discouraged on TV Tropes, since most of them aren't really useful or funny. In fact, there's a tag on Image Pickin' called NSFW/Image Macro. TLP Bump, Screw the Rules, I'm Beautiful!, and this page are the only exceptions to this rule.