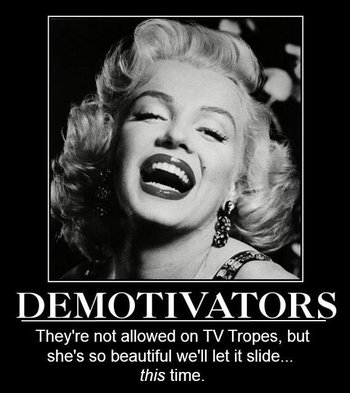 "No matter what I do, whether I kick kittens, or tear off people's ears, or even commit murder... the whole world will forgive me! Because I'm beautiful!"
— Boa Hancock, One Piece
Advertisement:

Somewhat of a Double Standard trope, where a conventionally attractive character gets away with morally ambiguous things, despite how similar actions usually get questioned when committed by characters that are considered ugly. The attractive character is almost always forgiven or doesn’t even get called out for their questionable choices from within the plot. Sometimes, their actions even get painted in a good light, and the plot even rewards them for them. Meanwhile, the ugly character gets shamed and villanized for doing similar things. It can be lampshaded or never addressed.

This kind of treatment can lead to the character being Easily Forgiven and becoming a Karma Houdini. Quite a few times, if the attractive character is a Stalker with a Crush toward another character, other characters will excuse their questionable actions as Stalking Is Love. Other times, characters might excuse it due to assuming that Beauty Equals Goodness (despite the character's dubious actions appearing to contradict that).

When it's the fans that excuse the character's actions for this reason, the character is a Draco in Leather Pants.

Obviously, this trope has a lot of Truth in Television. It's actually a well-documented psychological effect.

Related to Proud Beauty, What Measure Is a Non-Cute? and Screw the Rules, I Have Money!. I Have Boobs, You Must Obey! can be considered a subtrope of this. Contrast Kavorka Man. Compare So Beautiful, It's a Curse; any character who combines the two is just begging for a Hatedom. Compare and contrast also with Favors for the Sexy and Distracted by the Sexy. Characters who fall into this trope will rarely react well to their First Gray Hair, however; the ageing process can be particularly cruel on those who were beautiful in their youth, and they may find that people start to treat them very differently as they get older.

Contrast Wasted Beauty, when a character's flaws, quirks and/or bad behaviour manage to outweigh the attractiveness of their good looks.

Hancock abuses her beauty for all it's worth.

Alternative Title(s): Screw The Rules I Have Mammaries

Hancock abuses her beauty for all it's worth.