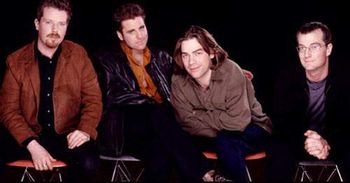 Their music is often energetic pop-rock (mixed with slower folk ballads) infused with a Newfoundland sound, which can be mistaken for an Irish one at a distance. This results in a Celtic sound that has proved popular with listeners from around the country. About half of their repertoire is simply their interpretations of traditional Newfoundland sea shanties, drinking songs, folk songs, etc. Well, the sea shanties and folk songs are mostly about drinking too.

Their concerts were known for their infectious atmosphere and a healthy amount of audience participation.

Founding member Darrell Power left the band in 2003 to spend more time with his family; Kris McFarlane and Murray Foster (previously of Moxy Früvous) were brought on as supporting members.

The band dissolved after Séan McCann left to go solo at the end of their twentieth-anniversary "XX" tour. Séan and Alan Doyle have gone on to release solo albums; Bob Hallett was the Newfoundland musical consultant for Come From Away.