Theatre / Come From Away 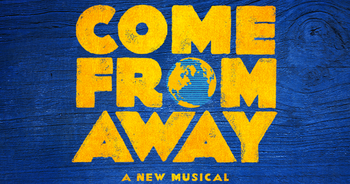 "♫ You are here...
At the start of a moment
On the edge of the world
Where the river meets the sea
Here...
On the edge of the Atlantic
On an island in between...
There and here... ♫"
—Newfoundland citizens in "Welcome To The Rock"
Advertisement:

Come From Away is a stage musical set in the aftermath of the September 11, 2001 attacks. When hundreds of planes are diverted away from the now-closed American airspace following the attacks, 38 of these planes (holding about 7,000 passengers) ended up in the tiny Canadian town of Gander, Newfoundland (population of about 9,000). The show follows the story of some of these passengers as they experience the overwhelming hospitality of the overwhelmed townspeople.

The musical itself has a very minimalist set (a handful of wooden chairs and tables; the only elaborate set piece is the stage turntable, which is barely used). Among the cast, there are no starring roles; the 12 actors in the cast are all billed equally. The cast all stay on stage for the vast majority of the show, and each actor plays many roles: one or two primary roles, and a series of extras or minor characters in all other scenes. The acoustic band also comes onstage for a couple of the songs (playing the part of townspeople who are, in-universe, playing instruments, for example) including the closing number, which typically has the audience standing and clapping along. The musical is under two hours long with no intermission, fitting with the nonstop breakneck pace of the action and dialogue.

Come From Away was written by a Canadian husband-and-wife team, David Hein and Irene Sankoff, following their visit to the September 11, 2011 anniversary gathering of the "come from aways" in Gander. It was workshopped at Sheridan College in Ontario in 2012 and 2013, played in La Jolla and the Seattle Repository Theater in 2015 and the Royal Alex in Toronto in 2016. The cast performed a pair of concerts in Gander, playing to many of the very people portrayed in the show, before opening in the Gerald Schoenfeld Theater on Broadway in 2017. Most of the cast stayed on through all of these runs. The musical has received seven Tony nominations for 2017. A second production opened in Toronto in early 2018.

In 2021, because of the COVID-19 Pandemic's impact on the theatre and film industry, previously-announced plans for a film production note which would have cast unknown actors, filmed in Gander, and hired locals as extras were scrapped in favor of a professionally-shot version of the show featuring most of the original Broadway cast.note De'Lon Grant replaced Rodney Hicks as Bob and others, Tony LePage replaced Chad Kimball as Garth, Kevin Tuerff and others, Emily Walton replaces Kendra Kassebaum as Janice Mosher and others, Jim Walton replaced Lee MacDougall as Doug, Nick Marson and others, and Paul Whitty replaced Geno Carr as Oz Fudge and others. It was released on September 10, 2021 - one day before the 20th anniversary of 9/11 - on Apple TV+.