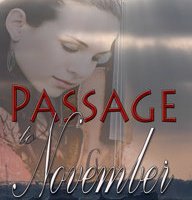 Clara Grace cannot recall the events that brought her to this desolate beach. Cold and alone, dim memories surface: a terrible storm… men swept to their deaths… a final kiss from the man who promised never to leave her.

Captain William McTavish believed life was best lived alone... until Clara Grace came to work aboard his ship. Something in her eyes... something in the music from her old violin, broke through his hardened heart... at last he'd finally found his kindred spirit.

Torn from each other by a white hurricane that has devastated the Great Lakes, they must pray their hard-won love can somehow lead them home.

Passage to November is an Historical Romance Novel set against the backdrop of the Great Lakes in 1913, culminating in the worst storm ever to hit the Lakes. The storm, called the White Hurricane by historians, devastated most of the Great Lakes shipping fleet and caused nearly 300 deaths. Written in 2011 by Phyllis DeMarco, the novel went on to win the 2012 EPIC Award for Best Historical Romance.