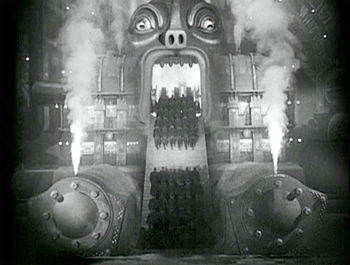 Factories made to look like one of the circles of Hell. This goes beyond the typical sweatshop aspects of long hours, slave wages, and No OSHA Compliance. Those things may happen through negligence, but this factory cranks all those aspects Up to Eleven on purpose, until the place is an enclosed Crapsack World.

People are walking zombies there, and may die at any moment, while the cold, lifeless (or are they) machines don't stop moving. For some people, death may be a release. Those at the top either live fat off their profits, or are suffering from the effects of the environment as well, likely going insane slowly, if they're not already dead. And expect various amounts of smog, smoke, and toxic waste being spewed outside.

This trope started when mainstream factories didn't have anything in the way of child labor laws or occupational safety standards, and then people were horrified by the meat factory descriptions given in the book The Jungle, and infamous Real Life incidents like the Triangle Shirtwaist fire

Overlaps with Eternal Engine in video games, and with Hellhole Prison wherever such places use convict labour.

Not to be confused with the band Fear Factory.