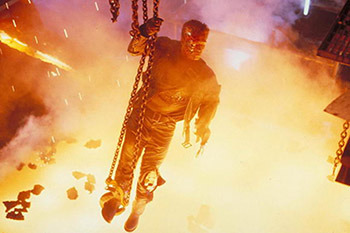 "You can't work in a steel mill and think small. Giant converters hundreds of feet high. Every night, the sky looked enormous. It was a torrent of flames — of fire."
— Jack Gilbert
Advertisement:

A steel mill is one of the closest approximations of Hell on Earth, if Dante's Inferno is used as a yardstick. Since metal work requires extremely high temperatures, a steel mill is a humongous maze of eerie machinery, fiery furnaces, extreme temperatures, molten metal, poisonous gases, foul smells, deafening sounds and, most of all, heavy objects falling from height when least expected.

The nucleus of the integrated steel mill is the smelting works, which consists of ironworks (a blast furnace, which makes pig iron from iron ore, coke and limestone) and steelworks (either a converter or open hearth furnace, which makes steel from pig iron and scrap), and rolling mill, which prepares the steel products. The latter has typically an electric arc furnace for smelting the scrap and rolling mill for producing the steel products, such as sheet metal, slabs, girders and pipes. Usually the integrated steel mill also has cokeworks for making metallurgical coke from coal, and a chemical plant for further refining the coal tar into various chemicals. The by-product of blast furnace, slag, can be used on making roads, bricks and cement.

Mini-mills have superceded traditional integrated mills rapidly, and they are important scrap recyclers. The electric arc furnace can be considered as a man-made lightning. They are usually located in places, where scrap can be easily obtained and where is an abundance of cheap electricity. A mini-mill consists of smelting works (based on electric arc furnace) and rolling mill.

At best, this may be a Big Labyrinthine Building - the Severstal mill at Magnitogorsk, Russia, spreads twelve kilometers along the bank of the Ural River. Real Life steel mills are usually hangar-like, with large open spaces inside, due to the need to move around heavy equipment. At worst, it is a true Nightmarish Factory. Its Dangerous Workplace nature is often displayed by a large X Days Since Last Accident billboard.note "Accident" usually refers to a significant bodily injury in this case, such as a broken bone or severe burn. Smaller injuries aren't counted. More recent works can depict these mills in a shut-down, boarded-up state to indicate a Dying Town atmosphere.

There are even enormous hydraulic anvils, in case the metaphor is just not anvilicious enough all on its own.