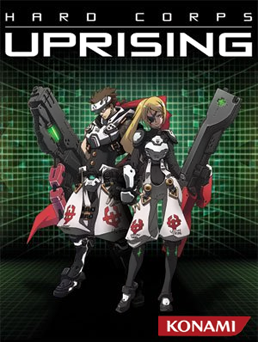 Hard Corps: Uprising is a downloadable entry in the Contra series released for the PlayStation 3 and Xbox 360. Despite not having the Contra name directly attached to it, the game makes it pretty clear that it is indeed part of the franchise. Developed by Arc System Works — best known for the critically acclaimed Guilty Gear and BlazBlue series of fighters — it's a prequel to the original Contra, the very first installment in the series released on arcades and Famicom/NES, as well as Contra: Hard Corps, the spin-off entry released on the Sega Genesis, hence the title.

The story of Uprising involves the, well, uprising in the far future against the world's current tyrannical dictatorship, the Commonwealth, and its leader Emperor Tiberius. Leading the Union Forces in the fight is ex-Commonwealth soldier Bahamutnote (Who has the same name as) the final boss of Hard Corps, who deserted and switched sides after realizing it was evil. His unit also consists of fellow soldiers Krystal, a young woman with considerable combat skills whose village was destroyed during a Commonwealth attack and joins the fight so nobody else would have to suffer a tragedy like hers; Harley, a boisterous guy with Cool Shades and an awesome pompadour; and female samurai Sayuri, who forgoes the whole shooting thing in favor of a more close up and personal approach to fighting. Of the quartet, only Bahamut and Krystal are initially available as playable characters, with the other two, as well as Tiberius' right hand man Leviathan, available as premium downloadable content.

Gameplay wise, Uprising combines the classic Run-and-Gun Contra formula — wherein you move forward mowing down hooded Mooks and other dangerous opponents, picking up weapon power-ups and dodging hailstorms of bullets — with the style and some of the mechanics of BlazBlue. By default, your character can sprint forward, double jump and dash in midair, which makes evading enemy fire just a tiny bit easier. In addition to the Arcade Mode's challenge of blowing through all eight stages in a single go with limited lives and continues, there's the more manageable "Rising Mode" where you can use upgrades to your characters purchased with your hard-earned points. These range from increasing your maximum amount of starting lives and health, improving your basic mobility, instantly receiving upgraded versions of weapons when you pick up their corresponding capsules, and adding new contextual moves such as dodging during a run (and counterattacking), reflecting certain enemy shots, or busting through barricades and enemy cover.