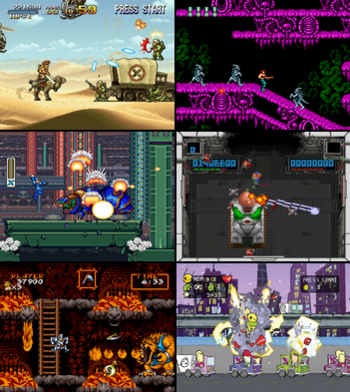 When a Platform Game uses gameplay mechanics borrowed from the Shoot 'em Up genre. Or a Shoot 'em Up with platformer elements, that works too. Also known as Action Platformer.

It is characterized by its hordes of vicious enemies who — unlike most regular platformers — cannot be harmed by Goomba Stomping them, long-ranged weaponry (distinguishing it from Beat 'em Ups) that can — despite the name — be something other than Cool Guns, Bottomless Magazines, and various Power Ups changing the weapon or its function. Expect a Spread Shot as a weapon type to deal with swarms of Mooks. Close combat moves are sometimes available, which could bring the game closer to the Beat 'em Up genre, which is also about going forward and beating up bad guys.

The genre originates from Arcades in the 1980s, dating back to Taito's Front Line (1982) before being codified by Capcom's Commando (1985), Konami's Rush'n Attack (1985) and SNK's Ikari Warriors (1986), generating tons of clones with various degrees of success. On consoles, it was mostly codified during the NES era with various popular titles like Capcom's Mega Man and Konami's Contra. Because of this time period, games like this are expected to be Nintendo Hard.

The genre is a staple of 2D video games as it never really successfully passed the Video Game 3D Leap, although one can argue that it stealthily evolved into the Third-Person Shooter genre (thanks to games like Cabal and Wild Guns) and Hack and Slash (which is historically a cross between Third-Person Shooter and Beat 'em Up, but some also include platforming sections and firearms). Platformer subgenres like Platform Fighters and Elimination Platformers could also be considered run-and-gun games if they mostly focus on gunplay and/or range combat.

It should not be confused with Metroidvania, a close cousin more focused on adventure and exploration with light RPG Elements and the opposite side of the Action Platformer genre. In Run-and-Gun, RUN is the key word. It implies moving forward and not looking back which can be enforced by a Ratchet Scrolling, and going for a more traditional linear level structure with one-hit-and-you-lose-it power-ups to emphasize the feelings of stress and urgency, where Metroidvanias offer an open world filled with locks and permanent upgrades unlocking those locks. It's not absolute though, and some games are able to balance the two by borrowing some mechanics from the other side. But it should be clear: having a gun in a platformer doesn't necessarily turns your game into a Run-and-Gun.

Note that Run-and-Gun is also a name given to Shoot 'em Up games with a top-down perspective where players can control a character or a grounded vehicle (contrasting the usual Space Fighter, usually a tank) with a 360 degrees liberty of movement, unlike traditional Shoot 'em Ups which lock the facing of the shooter in a single direction. The Trope Codifier of this specific genre from The Golden Age of Video Games should be Commando, and the success of The Binding of Isaac brought a wind of fresh air to the genre by adding Procedural Death Labyrinths into the mix.

Do not confuse with the game Run 'n' Gun, nor with Do Not Run with a Gun (a piece of advice that is largely ignored here). Also not to be confused with the tactic used in the sport of Basketball.