Webcomic / At A Good Pace 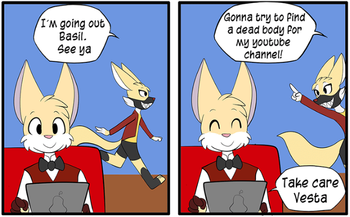 ...HUH!? A DEAD WHAT?!
"Join Vesta and friends in their daily lives, and the Fennec Fox's dreams of becoming a famous internet personality in a story of attempting to balance school work and ambition, and everyone handling Vesta's well intentioned chaos!"
— Asura Kitsune, providing the comic's blurb.
Advertisement:

A Slice of Life comic that takes itself... well, at a good pace! Fresh face and new college student Vesta Brulant has high dreams of being a popular YouTuber- if only real life wouldn't get in the way so much. Homework, a part-time cafe job, and questionable life choices all ensure that his adoptive guardian, campus counselor Basil D. Phox, will have his hands full trying to keep the young fennec fox from causing everybody he runs into no short amount of grief.

Previous versions of many of these characters appeared in an interactive Pokémon fancomic called “Misadventure of Basil”, formerly hosted on Tumblr, now being reposted to Tapas