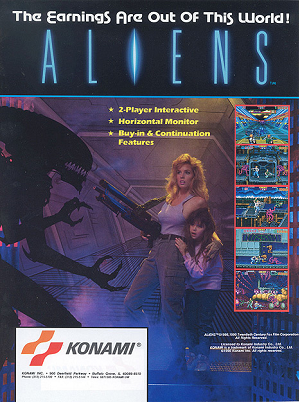 Aliens is an arcade run'n'gun video game created by Konami and released in 1990. It is based on the second installment of the Alien franchise.The game pretty much follows the plot of the second movie closely, Ripley joins a bunch of Space Marines as Scientific Advisor and they all come across a colony in ruins infested to the brim with Xenomorphs. It's up to her and Hicks to take up arms and kick some Alien ass while keeping Newt, the sole survivor of the alien outbreak, safe. Virtually, the whole thing is quite similar to Contra (made by the same company and considered a Spiritual Adaptation for Alien games before Konami got the license to make this title.)

With a gameplay similar to that of the TMNT game, albeit with shoot em'up elements. Ripley must travel through each level while gunning down aliens, collecting power-ups that help her improve her weapons, regain health with scattered food, and defeating a boss at the end of each level. There are also a couple of bonus stages where she must reach Newt with the help of a Wayland-Yutani vehicle in a first-person view while killing all xenomorphs in her path. These levels are absent from the Japanese version (with good reason.)

While the game is pretty faithful to its source movie, it is also notable for adding several kinds of bizarre and unique xenomorph breeds (some even bordering on downright Surreal Horror) that were absent from the film as well as chestburster-controlled zombies called Infectoids. Some of these (namely the Infectoids and the Chrysalis boss) would eventually find their way in Capcom's Alien vs Predator arcade.