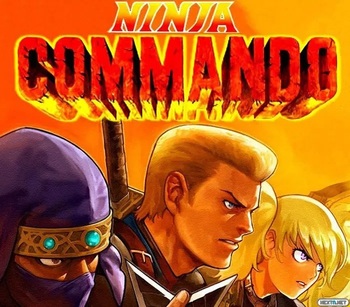 When the commandoes aren't good enough, it's time to send in the ninjas!
Advertisement:

Ninja Commando is a top-down arcade shooter made by ADK and SNK, released in arcades in 1992 before being made available for the Neo Geo CD.

In the near-future, a Mega-Corp called the Mars Corporation led by a supervillain called Spider is researching illegal technology and attempting to create assorted superweapons. Three members of the elite ninja commando force - Ryu Eagle, Joe Tiger and Rayar Dragon - is sent to investigate.

After battling their way through the Mars Corporation's security forces and taking down their private army, the ninja commandoes prepares to confront Spider, only for Spider to escape into a time machine and flee through time. The ninja commandoes managed to hijack a prototype time machine of their own and gives chase, leading to a series of levels in Feudal Era Japan, Ancient Egypt, Warring States China, the Age of Dinosaurs and Europe in the 1940s as they wipe out Spider's bases and stop the villain from rewriting history to prevent his present-day defeat.

"You guys have driven me completely mad!" — Spider

Spider's and Mars' scheme has been wiped out.
This is the finale. The battle throughout the ages seems to come to an end.
But remember, it is not equal to the coming of peace.
Peace in the future should be built by your hands.
END