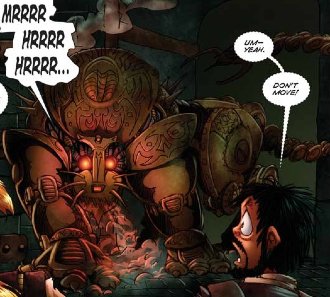 The Fun-Sized Mobile Agony and Death Dispenser, order yours today!
"The master of the Goblin blacksmiths offered to build the king a golden mechanical army. Seventy times seventy soldiers that would never know hunger, and could not be stopped."
— Tale of the Golden Army, Hellboy II: The Golden Army
Advertisement:

So your Mecha-Mooks aren't cutting it? What's the next logical step up from taking the already impressive stamina, loyalty, and destructive power of a mechanical henchman?

Simply, you go absolutely off the wall with them. Where the mecha-mook will be a dime a thousand, you'll see only a few, or only one, Mechanical Monster. This may be due to limited resources or simply because everyone involved in making it is no longer amongst the living. They are always improbably hard to stop, incredibly persistent, never needs to recharge and always, always terrifying to look at. Very likely to be the big bad's Dragon, and often times much tougher to kill.

While mecha-mooks are often fragile, incompetent, and generally gentle at their jobs, expect the Mechanical Monster to be far less kind to its prey. Slashing, stabbing, soul stealing to fuel their infernal engines, and loud noises are all par for the course.