Video Game / Knights of the Chalice 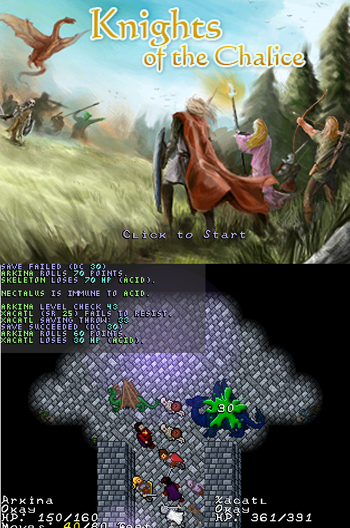 Knights of the Chalice is a retro-styled tactical Western RPG from indie developer Pierre Begue, released for Windows in 2009 on his website Heroic Fantasy Games

. Combat is turn-based, and uses Dungeons & Dragons 3.5e D20 Open Games License. The developer has cited Temple of Elemental Evil and Dark Sun: Shattered Lands as being major influences, while the plot is mainly based on classic Dungeons & Dragons modules Scourge of the Slave Lords and Against the Giants.
Advertisement:

You begin the game by creating a 4 character party, by choosing one of three races (human, half-elf, and half-dwarf, chosen by the author as animating them would require fewer resources) and classes (fighter, wizard, and cleric), which can then be further customized through attributes and feats later on. You are initially tasked by the eponymous Knights of the Chalice to find one of the missing members, but the plot is mainly there as an excuse to kill things as you go from dungeon to dungeon. The game is combat-focused, and there is little in the way of non-combat related skills and dialogue choices only affect gameplay in certain cases. The game's focus lies on varied combat encounters with a generally intelligent AI, often requiring a more tactical approach to combat, with a big emphasis on using correct positioning and the environment.

Although it has mostly fallen under the radar, it has been generally well received by those who have played it.

Knights of the Chalice 2 started development almost as soon as the original game came out, although the developer took a break to release Battle Of The Sands Real-Time Strategy game in the meantime. However, his determination to create an Even Better Sequel led him to expand the number of playable classes from 3 to 22, with corresponding increases in the number of skills and skill-related dialogue options, as well as an increased number of monsters, equipment, location tiles, etc.

This growth in complexity had protracted the development to almost a decade in length, and also led to a controversial Art Shift to a strict top-down perspective, where every character is represented by nothing but round tokens. As of 2019, the first module of the game, Augury of Chaos, is finished, and Pierre Begue is about to start a Kickstarter for the rest. The trailer is here