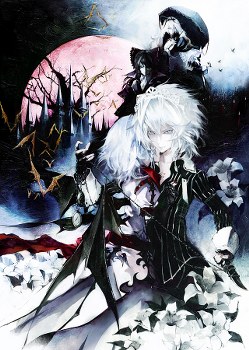 It's not as dark as it looks, but it's twice as hard.note On another note, you got your Touhou Project in my Castlevania!
Koumajou Densetsu (Legend of Scarlet Devil Castle) is a Castlevania-stylednote Classicvania, if you will series created by the doujin circle of Frontier Aja in 2009, with artwork by Akira Banpai.
Advertisement:

The first game in the series, Koumajou Densetsu: Scarlet Symphony, features Reimu Hakurei from the Touhou Project as its main character. The story: Gensokyo is covered in a scarlet mist... Again. Reimu Hakurei sets out to the Scarlet Devil Mansion, since that was where the previous scarlet mist incident happened previously, to fix this problem. Along the way, she meets Marisa Kirisame, who joins Reimu, and Cirno, who attacks Reimu at first, but eventually ends up joining Reimu's party. Together they fight through the newly built Scarlet Devil Castle, guarded not only by fairies and the other usual inhabitants of the Scarlet Mansion, but also by enemies straight taken from the world of Castlevania like the Medusa Heads, until they finally reach the mistress of the castle and discover the shocking truth...

For foreign players, Frontier Aja included in the v1.03 patch an English and French translation for the Story Mode.

In 2010 it was succeeded by Koumajou Densetsu II: Stranger's Requiem, which features voice acting by professional seiyuus, and Sakuya Izayoi, Remilia's head maid, as the main character. In this story, Sakuya has just returned to the Scarlet Devil Mansion only to find its inhabitants missing. Border youkai and overall troll Yukari Yakumo then appears before Sakuya and informs her that spring is late to arrive... Again! Sakuya travels to Hakugyokurou to investigate, where she discovers a rebuilt Scarlet Devil Castle built around the youkai cherry tree, the Saigyou Ayakashi.

The second game builds around many of the concepts of the first, and adds more sub-weapons in the form of partners, most of whom replicate the sub-weapons found in Castlevania (for instance, Meiling launches herself at an upward angle, then comes back down not unlike the axe, and Reimu throws a yin-yang orb that travels like the cross). The gameplay is also more polished, with fewer cheap shots and better balance overall.

In 2011 during Winter Comiket 81, Frontier Aja released the Koumajou Densetsu Premium Pack, a fully updated re-release of Scarlet Symphony and Stranger's Requiemnote (however, Stranger's Requiem was updated to v1.02a after the re-release) with an abridged version of the soundtracks, character artworks, and sprites of the characters and enemies from both games in one package.

On June 5th, 2021, it was announced that the first game in the series would be coming to the Nintendo Switch and Steam for the first time as Koumajou Remilia Scarlet Symphony.

Alongside those the from Touhou Project and the original Castlevania games, the tropes in these games are: