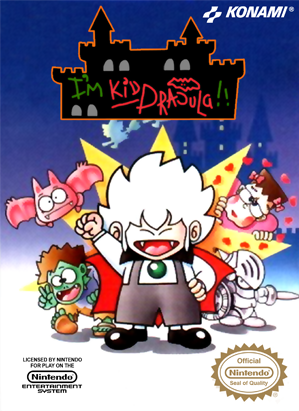 The first game was released for the Famicom in 1990, though it never received an overseas release, until May 16th, 2019, when it was officially released as part of the Castlevania Anniversary Collection for the first time in English. The second game was released for the Game Boy in Japan and the west in 1993 and, despite being treated as a sequel, is basically a remixed port of the first game.

The plot revolves around the 10,009-year-old son of Dracula (Alucard? Maybe) who awakens from a nap to discover that a powerful demon lord named Garamoth has brainwashed all of his demonic minions. The youth borrows his dad's cape and sets out to reclaim what rightfully belongs to his family, growing more powerful along the way.

Yes, that Galamoth. With an "R", because of a translator's confusion.

Oh, and about that ten thousand year thing...