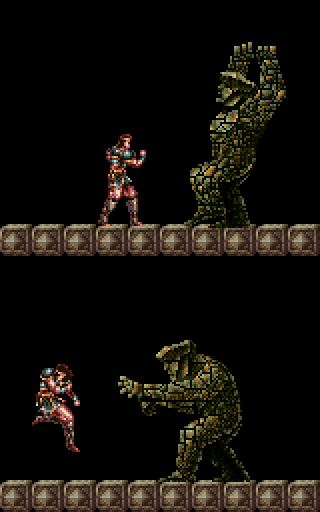 It's the hard knock life for us...
"But you might as well not bother with items, 'cause you can run away easily enough; and even if they catch you, there's good chance they just want to shove you about, like bullies trying to push you into the opposite gender bathroom until your health runs out..."
— Zero Punctuation on Remothered: Broken Porcelain
Advertisement:

The first and foremost reason why players hate those Goddamned Bats, and the means by which many Ledge Bats send players plummeting to their doom....

Knockback is a Video Game simplification of basic physics where if a character is struck by an attack, it will physically push them aside some measure of distance* Sometimes even allowing them to get to places they normally can't. Modern games featuring full physics engines can incorporate numerous factors (relative mass, speed, gravity/wind, etc.) to calculate the exact force and direction of it, while older and simpler (and by extension, Retraux) games will use extremely simplified rules, such as whether the attack originated from the right or left of the player and which direction the player was facing.

But regardless of its technical implementation, its actual effect on gameplay can be sorted into rough categories:

In all three cases, knockback is usually accompanied by some measure of Mercy Invincibility so that the player doesn't have to worry about becoming "stunlocked", trapped in a Cycle of Hurting where the next hit lands faster than the character can recover from the previous.

Knockback can also be used strategically, as a weapon of its own: A player on the losing end of a Fighting Game may be able to trigger a surprise victory by knocking their opponent out-of-bounds, and (by extension) the Ring-Out Boss lives or dies by who gets knocked outside the arena first. A "Get Back Here!" Boss may defend himself by knocking the player out of their attack range, and on the other hand a player can scatter a Zerg Rush with it, to engage and defeat foes individually. And then there's the Good Bad Bug known as the Rocket Jump, exploiting the knockback of an explosive weapon to send the user airborne.

Of course, some enemies won't suffer any knockback (or even flinch) when struck by the player's attacks — for Bosses, which are typically larger than the player already, this may be considered a standard part of their Contractual Boss Immunity. Likewise, players may sometimes be given this advantage via a Status Buff (or as a property of certain moves), and sometimes it is the only way to survive That One Attack. In Fighting Games, being immune to knockback is sometimes referred to as having "Super Armor".

And speaking of strategic uses, knockback is all-too-often remembered for occurring during precision maneuvers, such as when making timed jumps across Floating Platforms; every videogame character has at some point been sent plummeting into Spikes of Doom, or down the nearest Bottomless Pit due to taking a hit at the wrong moment; it's the culprit for many a Game Over screen (as well as a few broken controllers).

"Damage boosting" is also a common Speedrun tactic, where the runner achieves Sequence Breaking by exploiting the knockback to reach areas too high and/or far away to reach with a normal jump, thus saving the time it would take to go and obtain the Double Jump/Grappling-Hook Pistol/whatever that is needed to get there normally.

If the player has a command to parry or block enemy attacks, this may reduce or eliminate the knockback associated with it (or it will result in a Knockback Slide, with the character still on their feet). However, defending also tends to block the Mercy Invincibility, which can become a danger of its own if the attack still inflicts Scratch Damage, or has the potential to overpower ("guard break") the character's defense.

If the protagonist is a One-Hit-Point Wonder, then knockback is rarely a concern (except for some of the aforementioned uses), but may still occur if the hit cost the player their current powerup of their current life.

Note: Because of its ubiquity in Video Games, please limit examples to strategic uses or unusual occurrences.