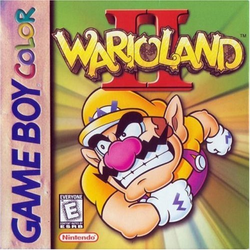 Wario Land II (subtitled The Stolen Treasure in Japan) is the second game in the Wario Land series (not counting Virtual Boy Wario Land), initially released in early 1998 for the Game Boy. An Updated Re-release on the Game Boy Color was released the following year.
Advertisement:

The plot of the game starts with Captain Syrup and her crew sneaking into Wario Castle while he's sleeping and make off with his treasure, as well as setting off his giant alarm clock and flooding the house by leaving the tap running. When Wario wakes up and realizes what they've done, he sets off on an adventure to reclaim his valuables.

The gameplay is much different from its predecessor — Wario is now completely immortal, and as such the worst enemies can do to him is alter his physical state for a while or cost him a few coins. These various transformations must be used to solve puzzles. In addition, there are several branching paths that can be unlocked, sometimes through unorthodox methods.

Wario turns into a ball when Dunk jumps on him.

Wario turns into a ball when Dunk jumps on him.