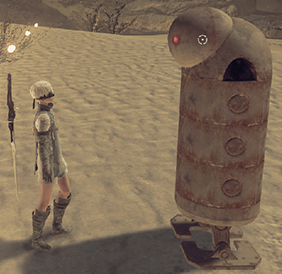 Red eyes, but no arms to hurt you.
Advertisement:

A type of enemy in video games that is completely incapable of damaging the player. Usually, they attack in an unconventional way (such as draining Mana, debuffing player characters in some way or causing an Interface Screw), but some serve no purpose other than to be destroyed by the player for points.

May overlap with Bandit Mook, Helpful Mook, Personal Space Invader. Pushy Mooks is a Sub-Trope when they're made to push you around. See also Defenseless Transports, Fairy Battle, and The Goomba. Compare Harmless Villain, and contrast Utility Party Member, a Player Party member who doesn't participate in combat often (if at all).