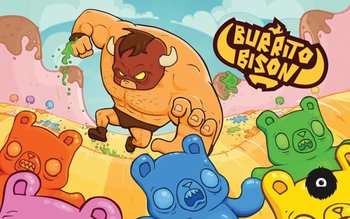 is a 2D Flash "launching" game made by Juicy Beast. Basically, the objective of the game is to launch the titular Bison across Candy Land in hopes of escaping this mad land - all the while evading the gummy bear police and crushing as many gummy bears as possible. Aiding him on his quest are the various power-ups (held by certain gummies) and the various buyable upgrades. In other words, it's a simplistic game with an original twist that doesn't reinvent the wheel but refreshes it in a nice manner.

A sequel, Burrito Bison Revenge, can be played here

, where the masked luchador goes back into Candy Land when he finds out that he left his wallet in it and now can't pay for his supermarket bill.

There is a 2nd sequel called Burrito Bison: Launcha Libre that can be played here

, where Candyland INVADES! and steals his recipe book, so Burrito Bison has to call in a few friends. Launcha Libre is also available on Android and iPhone.