We Can Rebuild Him 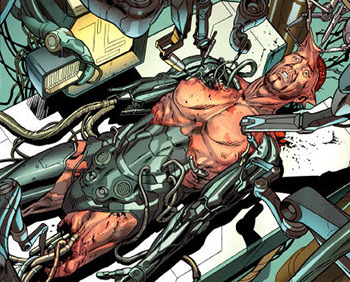 Unbearably painful? Yes.
Worth It? Also yes.
"Steve Austin, astronaut. A man barely alive. Gentlemen, we can rebuild him. We have the technology. We have the capability to build the world's first bionic man. Steve Austin will be that man. Better than he was before. Better, stronger, faster."
— The Six Million Dollar Man, Opening Narration.

A character suffers a horrific Disney Death. Their body is shattered beyond repair. No One Could Survive That!

But later, he returns! Only this time, he's a cyborg! He's got more power but he might be less human so in villainous cases it's OK to be more brutal on him. When heroes are subject to this, it tends to make them question their humanity, and in doing so retain it.

This trope can serve as the Origin Story for both heroes and villains of the cybernetic variety. Alternately, if the character being repaired is a ridiculously human robot, it justifies how they survive a seeming Heroic Sacrifice or Disney Villain Death.

A Sub-Trope of Emergency Transformation. Compare with Robot Me, Unwilling Roboticisation, and Virtual Ghost. Compare and contrast Dark Lord on Life Support, when a villain becomes weaker due to dependence on some external technology or host to sustain them. The fantasy counterpart is Came Back Strong. If the cybernetics are obvious and enhance the evilness of a character's appearance, it's a case of Red Right Hand. When the one doing the rebuilding is sadistic enough, it may involve Vader Breath. If the injuries are too extensive or the technology not far enough advanced, may result in Man in the Machine. A nasty variant is when a bad guy takes a Not Quite Dead hero and has him Reforged into a Minion.

After suffering from a "fatal" lip laceration, Sergeant Bosco takes in Bob and rebuild him as Officer RoboStache.

After suffering from a "fatal" lip laceration, Sergeant Bosco takes in Bob and rebuild him as Officer RoboStache.