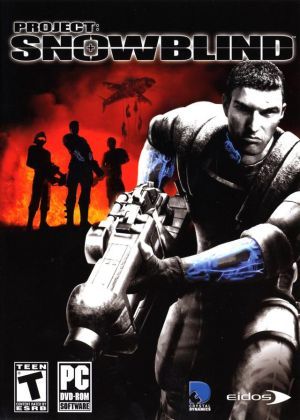 Project: Snowblind is a First-Person Shooter game for the PlayStation 2, Xbox and PC, developed by Crystal Dynamics and published by Eidos Interactive in 2004. It was originally going to be the third game in the Deus Ex series, Deus Ex: Clan Wars, but when Invisible War didn't fare well with its release, it was decided that Clan Wars should be a Spiritual Successor to Deus Ex instead of a regular sequel, set in its own universe. The game shares Deus Ex's First-Person Shooter gameplay and 20 Minutes into the Future setting, but lacks the Stealth-Based Game and RPG Elements.

In 2065, Hong Kong is attacked by a force known as The Republic led by Yan Lo, a rogue Chinese general. The Liberty Coalition, an international peacekeeping force, respond to this, and 2nd Lieutenant Nathan Frost is injured in battle. To save his life, the Coalition use experimental nanotechnology, making him a 'Scarecrow', granting him nanotech-based abilities, Augmentations. With his new powers, it's up to Frost and his force to stop Yan Lo before he can launch his operation, Project: Snowblind.