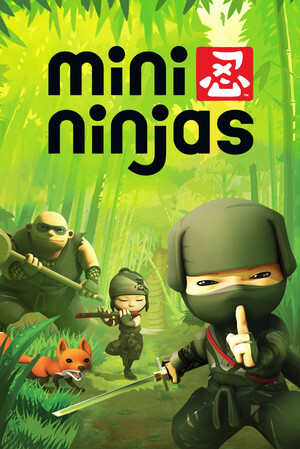 An Action Adventure-y, Platformer-y game developed by IO Interactive (yes, that IO Interactive), and published by Eidos for Steam, Xbox 360, Wii, Nintendo DS, and Playstation 3 on September 8th, 2009, with a macOS port developed by Feral Interactive releasing July 8th, 2010. While the cute title and ads set the game up as an Affectionate Parody of the "swords and black suits" genre, the game is actually a straightforward Japanese fantasy hack 'n slash game.... For kids.

Three hundred years ago, a dark force rose up and attempted to Take Over the World. Abusing a mystical force known as Kuji Magic, it transformed innocent forest animals into dark soldiers and ravaged the land. The abuse of this force also imbalanced the forces of nature, causing natural disasters. But he was defeated, and his dark magic sealed away forever. Peace reigned.

Or... what they thought was forever. Natural disasters of unnatural magnitudes are suddenly returning. And what are these mysterious samurai-like soldiers appearing everywhere? The wise old Ninja Master decides to send out his pupils one by one to investigate, and one by one, they vanish. Soon, he is left with only two ninja: promising but untrained Hiro, and clumsy but strong Futo. They are not truly ready for the world, but given the dire straits, they're the only hope the world has. Luckily, although their friends have been taken hostage, they're unharmed, and can be rescued. And they'll have to be if the balance of nature is to be restored!

The game combines action-adventure combat and exploration with platforming, with a large number of weapons, spells, and items to use, as well as six different ninja characters, each with different abilities. And despite what you might think, they're all normal-sized, thank you very much. Well... except for Futo.

Eidos got dissolved into Square Enix in 2009, with IOI being brought on as a developer studio, until they themselves went independent in 2017, after Square Enix cut business ties with IO Interactive. This was due to poor sales of Hitman (2016), and as part of IOI and Square Enix's agreement, the Mini Ninjas and Kane & Lynch IP's went to Square Enix, and the Freedom Fighters (2003) and Hitman IP's were given to IO Interactive. This makes IOI making any future Mini Ninja sequels highly unlikely.

Besides video games, an animated series based on the Mini Ninjas franchise, with 4Kids obtaining the rights to make the series in 2013, and it aired in 2015. Tropes for the animated series go on its own page.