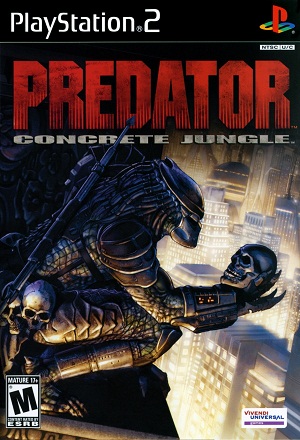 Predator: Concrete Jungle is a 2005 videogame released on the Xbox and Playstation 2 based on the Predator franchise.

The game follows a lone Predator, who, after failing a hunt in 1930's New Way City, is exiled by his clan to an alien planet, where he is left to survive on his own. A century later, the clan retrieves the Predator (now nicknamed "Scarface") and offers him a chance to reclaim his honor by going back to Earth and killing Hunter Borgia, the son of the leader of an Irish mob (who Scarface killed during the failed hunt) who has rewritten history by utilizing alien technology left behind during the previous hunt. Scarface must battle various mob factions and retrieve the lost technology as the player progresses through the game, as well as collect trophy skulls and complete optional missions. The game featured a number of unlockable items and costumes, as well as many references to the Alien and Predator franchises.

Has nothing to do with the 2015 Puzzle Game Concrete Jungle.