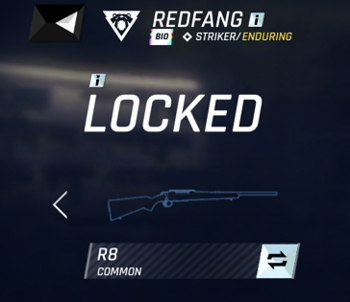 Isn't that a Remington sniper rifle?
"The TMP is actually an MP9. We incorrectly labelled it as such when the weapon was being modeled, and some gun-nerd got pissed off about it. So we kept it known as a TMP."
— James, developer of Cry of Fear
Advertisement:

In some computer games and RPGs, you get real guns with fake names. They have the appearance and the characteristics of the real gun, but not the name.

The reason appears to be avoiding potential lawsuits from the manufacturers of said firearms; it's a lot easier to prove a trademark infringement over a name than over the unique likeness of a weapon, and many companies haven't trademarked the latter anyway. There's also the issue of editorial control; much as car companies can dictate that vehicles in videogames not be shown crashing or being damaged as a requirement for licensing, gun companies could potentially demand their weapons only be shown in certain situations as a requirement for inclusion of their trademarks. Oddly, this often happens even with guns with which trademark issues wouldn't be relevant, whether because they're so old that trademarks have lapsed or because their developers went out of business.

In recent times, the likenesses of firearms have also been subject to this trope. The high level of graphical detail that modern computer games are capable of has caused some to fear that gun companies could take legal action on likenesses alone, regardless if a game uses fake names. Visual examples can range from minor embellishments to entirely fictional firearm models, the latter of which is typically done by merging visual elements from several real-life firearms into one designnote these are often derogatorily termed "Frankenguns" by firearm enthusiasts. In any case, the statistical behavior of these fictional guns are often closely modeled after real-life examples.

A subtrope of Bland-Name Product. Compare Improperly Placed Firearms. Often avoided by setting games in World War II or earlier, since most trademarks associated with weapon names from that period have long since lapsed. Can often overlap with Misidentified Weapons. When this is done with cars, see Fauxrrari.