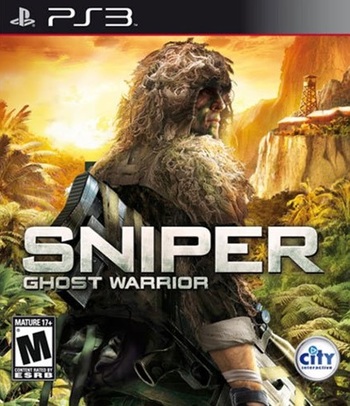 Sniper: Ghost Warrior is a 2010 First-Person Shooter from City Interactive, following U.S. Army Special Forces troops attempting to bring down the Latin American dictatorship of Isla Trueno. For the most part the game alternates between two characters; Sergeant Tyler Wells, a sniper and Cole Anderson, a Delta Force operator. Wells' sections are largely stealth based and have semi-realistic sniper mechanics including bullet drop and wind adjustment whilst Anderson's sections are traditional open combat with a small team supporting him. It later received an expansion pack entitled Second Strike, depicting the sniper team being sent to another Latin American country to hunt down Isla Truenan remnants.

Further games in this series:

Compare and contrast Sniper Elite, an earlier more well known third person sniper game with many of the same sniping mechanics, only Bloodier and Gorier aside from being set in World War II and having a zombie spinoff.