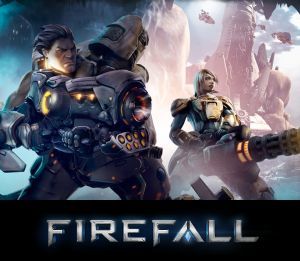 "Hey! I heard about you! Some new idiota thinking he can compete with the rest of us. Put your crystite where your mouth is, little one. You can find me at the bar."
— El Terremoto, in his pre-Live NPC Amnesia glory
Advertisement:

Firefall was an MMO Third-Person Shooter made by Red 5 Studios. It featured jetpacks, The End of the World as We Know It, aliens that came from a sentient radiation storm, and cartoony Cel Shading.

The main premise of the story was this: 20 Minutes into the Future, a massive asteroid impact, the titular "Firefall" occurs. The world shatters, continents are rearranged, and countries are broken and fragmented. But this impact brought Crystite, a blue crystaline mineral that can be used to power just about anything. For example, the Arclight: A massive capital spacecraft that would have been the first ship capable of traversing Hyperspace... except that its reactor overloaded and the ship crashed into Fortaleza, Brazil, unleashing a giant storm called The Melding which starts to cover the Earth leaving only New Eden, a piece of land in Brazil that survives only because the Arclight's reactor is still functional and somehow repelling the Melding.

From out of the Melding came a new species calling themselves the Chosen. They seek to eradicate the human race and Take Over the World.

The game was touted to be in an open persistent world in which "hundreds" of players can play together and try to defend themselves from the Melding. This depends largely on whether everyone shows up for one of the regular world events, which they usually do.

Firefall was officially released for everyone on July 29th, 2014 and shut down for good on July 7th, 2017. The game has received many patches, some of which introduced total overhauls to various parts of the game, so some tropes are applicable only to certain previous version of the game and may have since been removed.

. A mobile version was said to be in the works but is rotting in Vaporware as of 2020.

Has a finished tie-in comic, Affinity

, written by Orson Scott Card and his daughter.

Has a characters page. Not to be confused with the soft rock band of the same name.