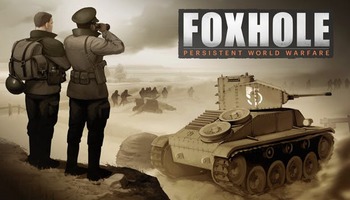 Set in an Alternate Timeline that resembles the World Wars , Foxhole is a Top-Down View, Wide-Open Sandbox war game. Players choose one of two factions—the Wardens or the Colonials—and battle for dominance over different battlefields, capturing resources and occupying the various towns. The war is persistent, the fighting continues whether you're logged in or not, and the logistics are completely player-driven. Players must gather resources, produce materials, deliver them to the battle, and then defeat their enemy in combat.

Foxhole can be found in Early Access on Steam.