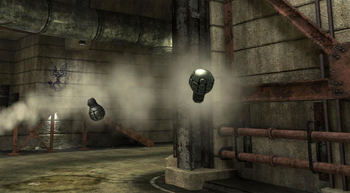 Incoming! Times Two!
"...which is sadly missing from World At War where you spend the vast majority of your time running away from some hilariously relentless grenade throwing. Seriously, the Japanese were the ones who invented the tactic of fearlessly running at the enemy with bayonets! Why are they suddenly so scared of death that they're resorting to filling the sky with grenades?! WHERE'S YOUR SENSE OF HONOR?!"
— Rabbid Luigi, "Top Five Hard Modes in Video Games" discussing 'Veteran' difficulty in the Call of Duty series.
In most shooting games; whether they be first person, third person or otherwise, grenades would be one of the weapons available for use. Now, grenades are designed to hurt and kill, and prove to be very effective methods against the enemy. As one of the characters in the Australian TV series
Advertisement:
Fire put it, lobbing a grenade is the best and quickest way to split up a platoon.

Now not every game that has grenades would see the enemy use them, though many of them do. They are usually a One-Hit Kill for the player, and most games that use them would also remember that the AI also has guns, and make use of them accordingly.

However that is not this trope. Grenade Spam is when more grenades are used than a soldier can conceivably carry, to the point that there are more grenades than bullets used. This can sometimes result in incredible frustration in multiplayer and single player alike, as it is seen as a cheap tactic, especially when the computer infinitely spawns grenades out of thin air.

See also Throw Down the Bomblet if spamming grenades is an individual's Weapon of Choice.