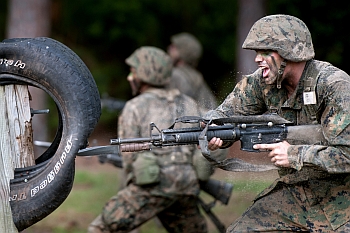 "Actually, Mr. President, Marines still use bayonets."
"Give 'em a bit of the old cold steel, Captain Mainwaring! They don't like it up 'em, sir, they do not like it up 'em!"
— Corporal Jones, Dad's Army
Advertisement:

Cool Guns are great ... until you run out of ammo, or the enemy gets too close to make firing practical. Thankfully, you won't be lugging around dead weight when you attach a sharp blade on it, allowing the empty gun to improvise as a Blade on a Stick. Even better when you can detach it and use it as is.

This is a common form of Mix-and-Match Weapon. Many fictional examples have a blade (or blades) permanently attached or even molded to a gun, which will often be used as a melee weapon with a Ranged Emergency Weapon attached. Rule of Cool dominates in these cases.

As a look through a history book will tell you, this is very much Truth in Television.

A Sub-Trope of Gun Accessories. See also Swiss Army Weapon, Emergency Weapon, and Blade on a Stick. Do not confuse with Bayonetta.

Trapped behind German lines, Sgt. "Bull" Randleman has to silently kill a German who has discovered his location, in this case with his rifle's bayonet.

Trapped behind German lines, Sgt. "Bull" Randleman has to silently kill a German who has discovered his location, in this case with his rifle's bayonet.