Break Out the Museum Piece 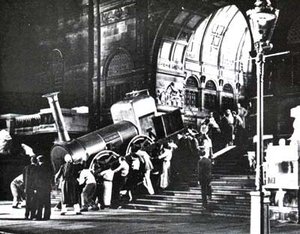 Enthusiasts take an old steam engine out of the museum.
"Still purrs, like it was yesterday."
— Batman taking out the Bat-Tank in Batman: The Dark Knight Returns after ten years
Advertisement:

Cutting-edge technology is usually superior to the older stuff. But sometimes heroes can't use the latest equipment: it may have been destroyed, stolen, confiscated, or rendered inoperable (or obsolete) by the enemy's Applied Phlebotinum or the Alien Space Bats. So what do they do? They take the older stuff out of storage and make do with it. And more often than not, the ancient devices still work just fine.

There is a certain degree of Truth in Television involved in this trope. Often the newer and more "advanced" a technology is, the more points of failure it can have. Older technologies may not be as efficient, however, they can still get the job done without the drawbacks of the newer technology. For example: compare attempting to navigate by GPS versus celestial navigation. Yes, the latter isn't as precise of a method, however, it doesn't rely on complicated electronics that can malfunction, be jammed, run out of power, etc. On any clear night, a knowledgeable mariner can easily use the stars to get to where he needs to go.

This trope is about using old equipment. When an old paradigm beats a new one (like pitfalls versus Humongous Mecha), it's Rock Beats Laser. When older equipment is better, it's They Don't Make Them Like They Used To when standards decline within a civilization, but Older Is Better when an older civilization or some flavor of Precursors are involved; in either case, an Archaeological Arms Race can ensue. If it's not better, it makes for an easy David Versus Goliath situation when it goes up against the newer tech, and as we all know, Underdogs Never Lose, perhaps because the user is more experienced. In SF settings, it's very possible that Kinetic Weapons Are Just Better. If the museum piece is used with something newer it's Retro Upgrade. See also Invincible Classic Car. Contrast with Unfinished, Untested, Used Anyway, in which the piece of equipment is usually a prototype or one-of-a-kind that's put into service before being properly put through its paces. If it needs to be fixed up before it can be used, that's Resurrect the Wreck.

After his first sortie against Tekkadan over Mars, Gaelio Bauduin switched out his EB-05s Schwalbe Graze for his families' Gundam: ASW-G-66 Gundam Kimaris, passing down his Schwalbe Graze to his ward Ein Dalton.

After his first sortie against Tekkadan over Mars, Gaelio Bauduin switched out his EB-05s Schwalbe Graze for his families' Gundam: ASW-G-66 Gundam Kimaris, passing down his Schwalbe Graze to his ward Ein Dalton.