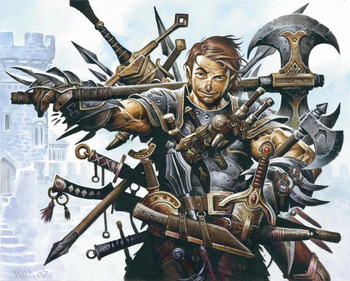 "Stars, you're like a walking — Does anything you're wearing not kill people?"
— Thera Markon (to the Bounty Hunter Player Character), Star Wars: The Old Republic
Advertisement:

In a lifetime, most are only skilled enough to properly use one weapon, let alone two (especially doing so simultaneously).

And then there's this guy.

He strolls into danger at a leisurely pace... and strapped to his back are enough weapons to make the U.S. military jealous. He doesn't even seem to have some magical satchel that he can just dump his weapons into for storage. Surely the weight must be doing a number on his back, right?

But no worries. The character is bona-fide badass, so they manage to pull it off. They are the reinforcements, and they've taken the necessary precautions for the upcoming fight - hauling as many weapons as they possibly can. You can bet your sorry behind that they're gonna use 'em all, too. They are often Multi-Melee Masters or Multi-Ranged Masters (or both).

Compare More Dakka, which is most likely the result when the character is packing heat. If so, expect them to be wearing quite a few Badass Bandoliers if their ammo supply isn't unlimited.

Generally goes hand-in-hand with a Wall of Weapons. If the huge amount of weapons is mostly/entirely hidden under the character's clothes, then you have Trenchcoat Warfare.