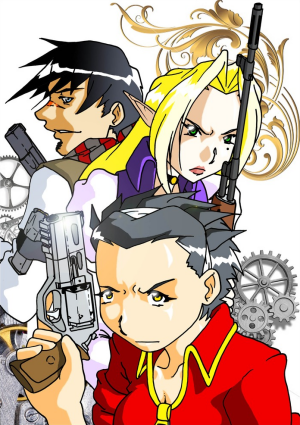 (front to back) Kylie, Gwyneth, and Zeits
Gwyneth: Sometimes it's not the prize so much as the chase.
Kylie: That's something that people say when they've never had to chase. It's like rich people saying money doesn't make you happy. You could have what you want chase or not. That's the only reason the chase is fun for you. When you have to chase, it's not a game. It's not fun.
Advertisement:

is a Weird Western by Chris Hazelton of Misfile. It stars Kylie, a gunmage who has to keep her powers secret because she's on the run from the Circle and gets a job as a hired gun. A mirror of the comic can be found here