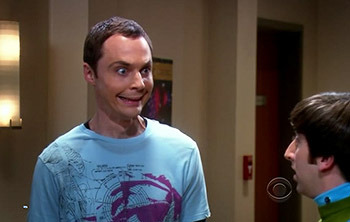 Those characters that never show any emotion? Or, if they do show emotion, it's always anger and/or despondency? Yeah, every single one of them was at one point told to "cheer up a little". The result? Horrible. It can range from merely discomforting to downright Squick, as they just don't get it. Expect more or less horrified reaction from their friends. Sometimes appears alongside HA HA HA—No when they're especially not buying it.

This trope is often accompanied by audible cracking, and always played for laughs. Not to be confused with Stepford Smiler, though they can overlap. May be the result of Finger-Forced Smile. Compare Slasher Smile, for when the smile goes from merely creepy to horrific. See also Technically a Smile. Opposite of When She Smiles, where a smile is especially nice for a character who rarely shows it.