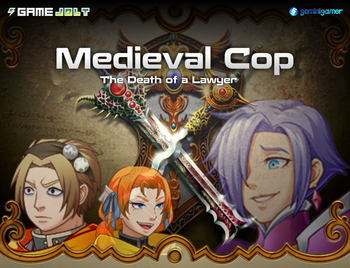 The Title Screen for "The Death of a Lawyer".
Advertisement:

Medieval Cop is an RPG Maker MV game series developed by VasantJ with all of the games freely available through Newgrounds. It has several side series: one called Medieval Shorts (later rebranded as Medieval Angel) focuses on idealistic new cop Amber, a second titled Medieval Chronicles that is a throwback to the first couple of games, a third featuring Ada called Wolf's Bane, and a fourth called Medieval Mirrors. There's also a spin-off game that doesn't involve the main story called How the Grump Stole Christmas.

The story stars incredibly depressed cop Dregg Morriss, who deals with a wide variety of cases in a medieval fantasy land, all while saving the world and planning the incredibly fiery destruction of the Post Office. In his way stands a psychotic serial killer, whole nations planning war, and a manic cult planning the end of the world. Medieval Shorts stars Amber Heart, a rookie cop with big dreams of saving the day and being a hero to the people, although the reality of the job threatens to dampen her spirits forever.

The games play similarly to the Ace Attorney series of games as you have to explore the area and collect clues before exposing the truth in a grand climax. As the series has progressed, the games have become more expansive to include even more standard RPG elements such as puzzles and combat.

The series can be found on KongregateHERE

. Later installments are posted on NewgroundsHERE

, or are findable through his Patreon HERE

Games in the Medieval Cop main series
Season One