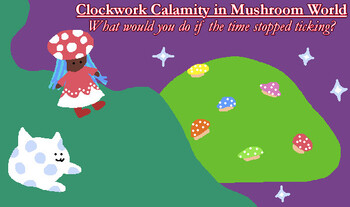 I'm dreaming of a mushroom world
Where the sun shines and the moon glows bright.
Advertisement:

Clockwork Calamity in Mushroom World is a game by Sylvie

, known for games like cat planet, Craz'd!, and Jiggly Zone.

In a world where time has stopped ticking for some reason, mushroom princess simply known as Princess, she is tasked to help other denizens of Mushroom World and more importantly, return all twelve Hands of the Cylvey Clock Tower in order to restore the flow of time. She must do so by collecting mushrooms from Mushroom Zones and trading items with other inhabitants of the Mushroom World to complete her quest.

The game can be found on Steam