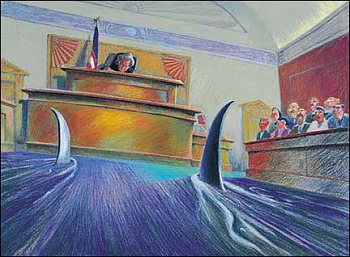 "I need someone as dishonest and devious as a 50-thousand-year-old magical jerk. I wish I had a lawyer!"
— Timmy Turner in The Fairly OddParents, "Genie Meanie Minie Mo"
Advertisement:

Lawyers, who often defend people or practices that are considered unpopular or wrong (or justify draconian laws in the case of prosecutors), are an infamous Acceptable Target. It is often stereotyped that students of Law, Political Science, any debate-intensive course, etc. are total, aggressive, shameless, and argument-prone assholes who, for example, profit massively from the misery and misfortune of others, drink like fish, join fraternities, manipulate the system, and everybody else around them as ambitious opportunists as if they follow Machiavelli as their equivalent of Muhammad, and so on.

Note that this refers to an explicit or implicit suggestion that all or most lawyers are evil, by:

The word Satan can be translated as "accuser/prosecutor", which might have helped inspire the Occult Law Firm trope.

Tends to be associated with America (especially in The '90s) although it's a global trope to some extent.

One reason lawyers make such Acceptable Targets may be that, not only are aggression and opportunism both important in the litigation career, people generally only interact with them directly at difficult times in their lives (when facing criminal sanction, civil suits, or the complexity of land laws when buying a house), meaning individuals are not associated with the good parts of the legal system, like public order and good lawmaking.

TV Tropes is not above this: see Screwed by the Lawyers, which has more to do with contracts and copyright than lawyers.

See also Ambulance Chaser and Amoral Attorney, for the evil lawyers themselves.

Lawyer jokes are fairly common in the profession, obviously. But anyone who uses them should remember one thing: Nobody likes lawyers until they need one.

A world without lawyers

A world without lawyers