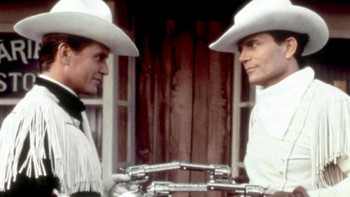 Rustlers' Rhapsody is a 1985 Western comedy written and directed by Hugh Wilson.

Rex O'Herlihan (Tom Berenger), the Singing Cowboy, rides his wonder-horse Wildfire into yet another small frontier town to dispense a dose of non-lethal justice to the local Cattle Baron, Colonel Ticonderoga (Andy Griffith). Only this time, reality finally catches up with Rex, and things do not go entirely as planned...

The film was a parody of many classic Western conventions, such as the singing cowboy films of the 1930s and 1940s. It was inspired by Wilson's experiences working at CBS Studio Center, once the lot of Republic Pictures, whose library is now owned by the film's distributor Paramount, whose current parent Paramount Global also now owns CBS Studio Center in addition to the CBS network itself, but is planning to sell off CBS Studio Center to Hackman Capital Partners and Square Mile Capital Management.