The Law Firm of Pun, Pun, and Wordplay 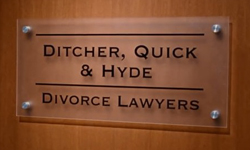 "Our legal counsel from the firm of Dewey, Cheetham, & Howe is Hugh Louis Dewey, known to the jaywalkers with pedestrian rage in Harvard Square as Huey Louie Dewey..."
— Car Talk, the "closing credits"
Advertisement:

You're faced with a serious problem, and are in need of legal assistance — luckily, there's a reputable, established law firm nearby. They're even putting a named partner on your case! Only thing is, that name seems like it's trying to tell you something...

Some common variants are:

The trope codifier is "Dewey, Cheatham and Howe,"

which in and of itself has also been used in fiction, and still gets some mileage, even to this day.

The joke also appears for other professions, such as a firm of cowboy builders named "Bodgit and Scarper" or "Blagget, Bodgit and Scarper".note British slang: "bodge it" means "half-arse it", "scarper" is "run away" and "to blag it" is "to talk something up", "to con" or "to lie like the dickens". Guess who is in charge of sales, suspiciously inflated ratings, payroll and customer run-arounds... Beware the likely sockpuppets named Blarney and Bloggs.