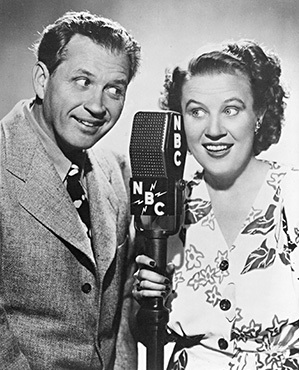 A comedic radio series that ran on NBC from 1935 to 1959 in one form or another. The stars of the program were the real life husband-and-wife team of Jim and Marian Jordan, who took characters honed in earlier vaudeville and radio work and combined them with a Midwestern small town setting to create an iconic radio program.

Fibber and Molly McGee lived at 79 Wistful Vista in a town also named Wistful Vista. Fibber had no actual job, and spent much of his time on get-rich-quick schemes which never panned out. Despite this, somehow the McGees never seemed to actually run out of money and lived quite comfortably, even being able to afford a housekeeper for a while. Each week Fibber would try out a new Zany Scheme or attempt to perform some simple task, only to get interrupted by people dropping in at the house or stopping him and Molly on the street. To break up the gags, there would be one or more musical interludes.

The show was massively popular in its time, starting its peak years in 1940, but running through The Great Depression, World War II, The '40s, and The '50s. Its running gags and characters inspired many imitators. There were two spin-offs: The Great Gildersleeve, featuring blowhard neighbor Throckmorton P. Gildersleeve, and Beulah, which starred the McGees' housekeeper. There were four movies featuring the characters (none of which are legally available on DVD as of 2009) and a short-lived television series with younger actors in the lead roles.

Tropes featured in Fibber McGee and Molly include: