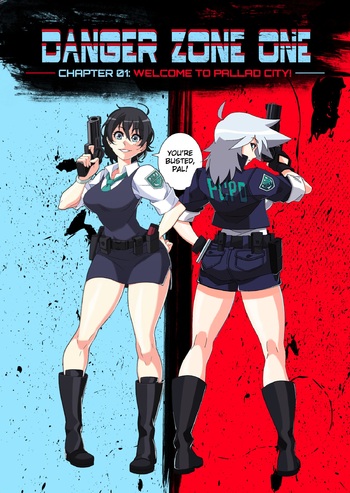 Reena and Madison in their police uniforms
Advertisement:

Reena Saffron is fresh out of the academy and eager to begin her first day as a full-time officer with the Pallad City Police Department. But her idealistic nature and unwavering belief in justice is put to the test when she’s partnered with ‘Maniac’ Madison Wynter, a loose cannon officer with the Department’s Special Crimes Unit, whose methods stretch the law to its very limits. Even thought the two officers are polar opposites, they’ll need to find common ground if they intend to survive in Pallad City: a district so dangerous, it's known as 'Danger Zone One.'

The story takes place in a near future setting where megacorporations run the world. There are elements of science fiction and cyberpunk incorporated in the series, with appearances by rampaging power suits, synthetic black market super drugs (only featured in the novel series

), and tentacle mecha (also only in the novels

Danger Zone One updates weekly (every Sunday and Wednesday).

There is also an ongoing Danger Zone One novel series, which can be found exclusively on Amazon via eBook format

. Midnight also writes another weekly webcomic, Welcome to the Machine

, though it went under "indefinite hiatus" after the third chapter. The series has also garnered two ongoing spin-offs: The White Wraith

, which uploads every Thursday, and GunRiot

, which uploads every Monday.

Danger Zone One provides examples of: