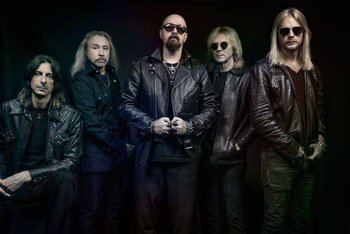 Judas Priest's current lineup. From left to right: Scott Travis, Ian Hill, Rob Halford, Glenn Tipton and Richie Faulkner
"There I was, completely wasting, out of work and down
All inside it's so frustrating as I drift from town to town
Feel as though nobody cares if I live or die
So I might as well begin to put some action in my life!"
— "Breaking the Law"
Advertisement:

Judas Priest is a Heavy Metal band that got its original lineup in Birmingham, England, in 1969. Taking their name from an ensemble also called Judas Priest which split up earlier that year, lead singer Al Atkins approached K.K. Downing, Ian Hill, and John Ellis to become their singer. Atkins and their subsequent drummer Alan Moore (not that one) left in 1974. Ian Hill's girlfriend suggested her brother, Rob Halford, could fill Atkins's departure.

Halford and his fellow Hiroshima member, drummer John Hinch, joined Downing and Hill, and Judas Priest as we know them was formed with their debut single "Rocka Rolla" in August. JP kicked out Hinch after the Rocka Rolla album and went through three more drummers until they picked up Scott Travis in 1989 (previously of Racer X).

In the 1980s, America's Moral Guardians accused JP of Subliminal Seduction in the 1985 suicide and suicide attempt (latter eventually died of his attempt in 1988, three years later) of one teenager and one then newly ex-teenager. After Judas Priest was acquitted of this in 1990, Rob Halford responded by stating that the alleged message to "do it" didn't say what to do, and that subliminally provoking his audience to commit suicide would be counter-productive; the ideal subliminal message would have been "Buy more of our records." (And it's not as if it was even possible for it to be their fault anyway, since Spooky Tooth had written the song nearly 10 years earlier.) The case was predictably laughed out of court.

Halford left in 1992, and JP brought on Tim "Ripper" Owens in 1996 for Jugulator and Demolition. Halford returned in 2003; in the interim, he had publicly come out of the closet in 1998 after five years of rumours. The rest of the band had known the whole time.

Rob Halford also figures heavily in Brütal Legend. He voices two fairly major characters, one of whom closely resembles him, two other major characters share his surname, and there's a lot of Priest on the soundtrack.

Unfortunately, in 2010, they decided that it was time to retire and announced their farewell Epitaph World Tour. However, they have stated both in press conferences and online that they will release at least one more studio album afterwards. Also, they decided not to retire after all and will continue touring.

On the 20th of April 2011 the band announced K. K. Downing had left. The band went ahead with the tour and started working with new guitarist Ritchie Faulkner, who has previously worked with Lauren Harris, daughter of Steve Harris.

And so on, ad infinitum.