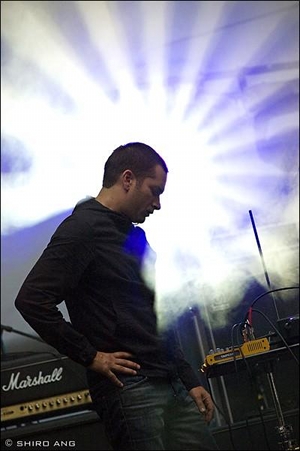 I'll make your dreams come true / with my monosynth.
"At its best, Joy E has always been about very straightforward melodic pop songs with an artistic element. I’ve struggled in one sense because although I love pop songs, I also love early electronic music, which to me is about using very raw, minimal textures that don’t necessarily go well with those more euphoric style pop songs I tend to sometimes write for Joy E."
— Ronnie Martin, in a 2011 interview

Joy Electric is a Christian Synth-Pop project from California, formed by Ronnie Martin in 1994. Although Ronnie has collaborated with various musicians in the past, it has, for the majority of its existence, remained his solo project.

JE's origins lay in the late-80s collaboration between Ronnie, his brother Jason, and their friend Randi Lamb: a band they named Morella's Forest.note No relation to the 90s band from Dayton, Ohio, also named Morella's Forest. They recorded one album of goth-influenced new wave, which got indefinitely shelved when Narrowpath Records, the label set to release it, went out of business.note Though that album did eventually get released in 2021. Randi then departed, and the duo of Ronnie and Jason pivoted to incorporate more techno and rave sounds into their music, eventually signing to the fledgling Blonde Vinyl Records under the new name Dance House Children. Jason left to start his own rock band, and Ronnie shifted from rave music to pop, changing the name of the project to signal the transition (and moving to Tooth & Nail Records after Blonde Vinyl died).

Joy Electric continued changing, minimizing their sound in pursuit of Ronnie's ideals of analog musical purity. We Are the Music Makers saw Ronnie eschew the samplers and drum machines of his prior albums, making music purely with synthesizers. On Robot Rock he ditched his digital synthesizers and performed exclusively on analogue synths. Then The White Songbook and subsequent albums saw Ronnie stripping the sound down even further, recording entire albums on a single synthesizer (initially a Roland System 100, later a Moog Voyager). The instruments may have been minimal, but the music wasn't: The White Songbook in particular featured JE's densest instrumental arrangements, and The Otherly Opus went crazy with vocal arrangements.

In 2010, Ronnie moved to Ohio, got a day job as a worship arts pastor, and then became the pastor of another church. At the time, he had big plans for his music: to retool Joy Electric as a poppier band (and start using chords again), while simultaneously delving further into the sounds of early electronic music under the new moniker Said Fantasy. Unfortunately for music fans, Ronnie's responsibilities as a pastor have prevented him from devoting as much time to new music. The first album of the new sound, 2012's Dwarf Mountain Alphabet, might also be the last Joy Electric album, ever. And Said Fantasy's first album was scheduled for "early 2014", but didn't actually see the light of day until 2017. In 2021, Ronnie teased on Twitter that he's recording new music

, for a "debut solo album" apparently unrelated to Joy Electric or Said Fantasy.